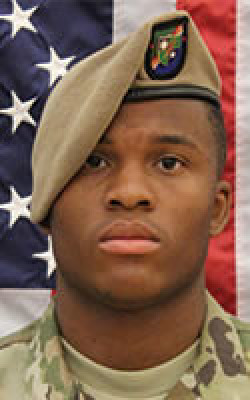 Spc. Etienne J. Murphy, 22, of Loganville, Georgia, died May 26, in Al-Hasakah, Syria, of injuries sustained during a vehicle rollover related incident. The incident is under investigation.

The Defense Department on Saturday identified the U.S. service member who died Friday in Syria while participating in Operation Inherent Resolve.

Spc. Etienne Murphy, 22, died in Al-Hasakah, Syria, of injuries sustained during a vehicle rollover related incident, according to the Pentagon.

Murphy was an infantryman assigned to B Company, 1st Battalion, 75th Ranger Regiment, at Hunter Army Airfield, Georgia. He was on his first deployment, according to information released by U.S. Army Special Operations Command.

Murphy was born in Boston, Massachusetts, and enlisted in the Army from his hometown of Snellville, Georgia, in June 2013, according to USASOC. After training at Fort Benning, Georgia, Murphy served in 2nd Battalion, 22nd Infantry Regiment, which is part of the 10th Mountain Division’s 1st Brigade Combat Team, at Fort Drum, New York.

His awards and decorations include the Parachutist Badge, the Army Achievement Medal with three oak leaf clusters, the NATO Medal and the Operation Inherent Resolve Campaign Medal with Campaign Star.

There are about 6,000 American troops spread between Iraq and Syria, where this week Marine Corps artillery crews established a firebase from which U.S. forces intend to attack Islamic State group targets in and around Raqqa.