A Letter from Stephen Blackwell

I have pleasant and very fond memories of CSM Caro. He is a Ranger’s ranger. CSM was always attentive to what you had to say. After a company run, I saw him attending to his leg. I approach him and observed a wound on his shin that was draining and he was cleaning it with hydrogen peroxide. As we conversed and I inquired, CSM said it was a wound suffered from an AK-47 in Vietnam. If I recall, at this time it had to be late 1975 or early 1976. Point being, this soldier had been treating a fragile skin graft for many years struggling with a stubborn healing problem and fending off looming threat of infection. No doubt, he would always occasionally, need to attend to this personal care after most runs or any other strenuous exercises. No sick call, no medic, only disregard for himself and total care for his Ranger’s. In a similar way, memories of the Reforger Exercise in Germany, my weapons platoon was assigned to HHC company with CSM Caro. He organized use into a ‘Ready Reaction Force”. Those memories of going out at a moments notice and capturing the aggressor forces, driving up and down the German streets, eating together, joking together are all great times. There are many other fond thoughts of CSM Caro. I can honestly say he was very proud of being a member of the 1st Battalion and leading a fine bunch of ranger men. CSM Caro was truly an asset to the 1st Ranger Battalion, the U.S. ARMY, and a Ranger’s ranger! I know God has him on security duty in Heaven above. Hooooah! RLTW 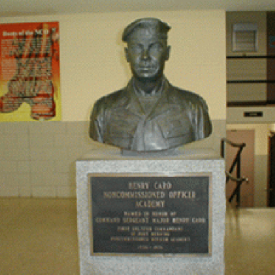