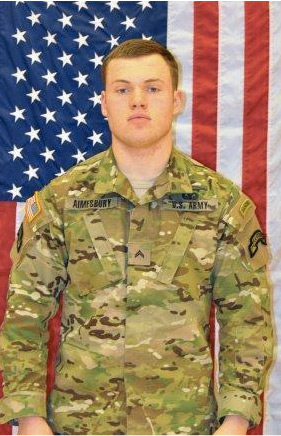 Corporal Andrew A. Aimesbury, 21, of Strafford, N.H., died from his wounds on December 9, 2015 after he was taken by Medevac to a treatment facility, the Army said in a statement on Friday.

“Corporal Andrew Aimesbury was an exceptional Ranger leader and an extraordinary man,” Colonel Brandon Tegtmeier, commander of 1st Battalion, 75th Ranger Regiment, said. “He was universally liked throughout the battalion for his competence as a warrior and his caring nature.”

New Hampshire Governor Maggie Hassan, in a statement, said, “Corporal Andrew Aimesbury was a well-decorated soldier lauded by his unit as an exceptional Ranger, strong leader and extraordinary young man. He bravely served our country in Afghanistan, and thanks to his unyielding commitment to protecting his fellow citizens, our country is safer and our freedom is stronger.”

In January 2013, he enlisted in the Army and later completed One Station Unit Training at Fort Benning, Ga., as an infantryman, according to the Army’s statement.
Also at Fort Benning, Aimesbury graduated from the Basic Airborne Course and the Ranger Assessment and Selection Program before he was assigned to Company D, 1st Battalion, 75th Ranger Regiment.

Aimesbury is survived by his parents, Carl and Karen Aimesbury, and his sister, Abigail, all from New Hampshire, Army officials said.

On Friday, Carl Aimesbury called his son “an inspiration to all who knew him” in a statement he posted on Facebook.

“He was an Army Ranger and so proud to serve his country,” Carl Aimesbury said. “My heart is broken but I am so thankful for the time I had with him. I love you Andrew.”

Tegtmeier said the tragic event has affected Aimesbury’s entire battalion. “Corporal Aimesbury will always be a member of 1st Ranger Battalion and his memory will make all of us better men,” he said.